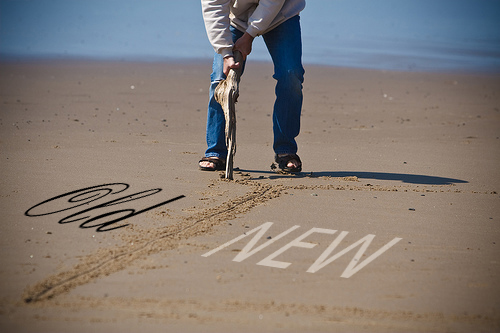 And all the people responded with a great shout when they praised the Lord, because the foundation of the house of the Lord was laid. But many of the priests and Levites and heads of families, old people who had seen the first house on its foundations, wept with a loud voice when they saw this house, though many shouted aloud for joy, so that the people could not distinguish the sound of the joyful shout from the sound of the people’s weeping, for the people shouted so loudly that the sound was heard far away. (Ezra 3:11b-13)

People groups often adapt to change in fits and starts. Some people like fresh inventions and innovations; other people find the new expressions difficult or substandard, and long for things as they used to be.

The people of Israel had been in exile, and had recently been released to go back to Jerusalem and rebuild the city under the watchful eye of King Cyrus of Persia. The city walls were repaired, taunting enemies were chased off, and—with great anticipation and fanfare—the foundation of the new Temple was laid.

The former Temple—a glorious structure built by King Solomon—had long been destroyed. The new Temple would bring joy to the people as a worshipping community, but it would be a different structure than the one that preceded it.

So there was both rejoicing and weeping when the foundation was completed. Perhaps the older folks wept, not only because the Temple was returning to Jerusalem, but also because it would be different from the one they remembered from their youth. For the younger people, who had no memory of the former Temple, it was a new and exciting project, one that would finally ground their identity in their homeland.

We’re told that all the voices—the weeping, the laughing, the mourning, the rejoicing—all came together as one voice.

We who follow Jesus do so in a culture that is characterized by rapid, discontinuous change. It’s not just that the world around us changes—technology, international relations, social and legal boundaries—but also that the life of the church keeps changing. New expressions of worship and mission emerge, sometimes on their own, and other times in the midst of congregations that have been immersed in many years of tradition. People often rejoice when these changes come. Others, however, weep.

The older I get, the more I appreciate this tension. It’s difficult to distinguish between traditions that have deep and lasting value and those that are just temporary cultural preferences. It’s both exciting and frightening to pursue innovations in worship and communal life. It’s too bad, however, when the response of the church is to divide and separate, draw lines in the sand and create boundaries that alienate.

It is a joy, however, when all come together and search for the fingerprints of God in what seems to be emerging in our midst—not new expressions for the sake of newness, but fresh engagements with the Spirit of God that capture new images and songs, revitalizing ancient traditions and creating new ones. And within all the tension that comes with new things, the voices that cry out do so as one voice, a voice that rejoices before God.

Right now I’m hearing the prayer of Jesus—a prayer that anticipates even us—that might help us think about this:

A Night of Thanksgiving 