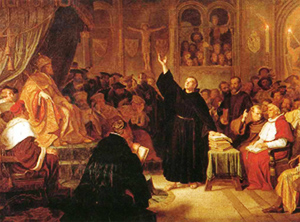 Most Protestant look back to the Reformation as their theological touchstone. But we often wrongly think that the Reformation was only about doctrine, primarily justification by faith through grace.

Actually, the Reformers were looking for a new kind of Christian life. They were disappointed by much of medieval spirituality and church life. They were looking for a version of the gospel that would produce sincere holiness and be a blessing to every village.  Speaking of the English reformation, historian Stephen Neill explains, “They were convinced that the new understanding of the Gospel, with it’s appeal to the whole man, mind, and conscience and will, could bring about that inner reformation that to them was more important than any change in ritual or in the organization of the church.” The Reformers were looking for a change that benefited others. They thought that Christians had one vocation, to be a saint for the sake of serving others.

The layman also is called to be a saint. [T]he place in which he must work out his saintliness is the home, the bank, the factory, the dock, the field, . . . and if he has understood his vocation, he can be sure that God will be as much with him there and he is with the priest saying [the benediction] in church. ~ Anglicanism by Stephen Neill