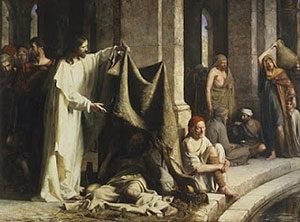 There are conversations floating around the cyber world about how the more developed theologies of the north and west (mostly Europe and North America) might help inform and shape the church as it emerges in the south and east (Africa, Latin America, Asia). As the historian Mark Noll points out, while the church of the southern hemisphere might have all sorts of denominational affiliations, beneath it all is an underlying Pentecostalism—that is, a belief that the supernatural world is as real as the one we see and touch every day.

The church of Europe and North America has been deeply shaped by the Enlightenment, and belief in things supernatural has fallen on hard times over the last 300 years. It’s not that Christians have no interest in the subject, but it appears to be much less robust than what is seen among Christians in the parts of the world where the church is dramatically growing.

I wonder if the expansion of the church in the southern hemisphere will reshape us in the north and west rather than the other way around? Or will these newly-developing Christian movements become a different kind of Christianity altogether? Will there be, for example, a church in one half of the world that prays for God to heal people’s bodies, and a church in the other half that doesn’t?

It’s interesting to me that the subject of prayer for healing has, for several hundred years, been controversial except among Christians in the southern hemisphere. They seem to take it for granted. The rest of us don’t.

It’s a sketchy thing, this theology of healing. I know it has traveled some rocky roads, with some claiming that it all died out with the last apostle, and others insisting that everyone could get healed if only they could drum up enough faith. Neither of those ways of thinking has been helpful, in my view.

But what if our southern friends are right, and the expectation of God bringing health to sick and injured people is appropriate for us? What will that mean?

Will it mean that medical care should be shunned? I don’t think so. But perhaps we can think about putting medical care in a new perspective. Most cultures offer some sort of care through medical professionals, and perhaps, even without realizing it, such efforts reveal something about the image of God that is imprinted upon all people. As a result, we can’t help but find ways to care for one another. But such care need not be seen as the last word.

Will it mean that we recast healing as an expectation that is embedded in the Atonement? I hope not, although there are still people who make that claim. We might need better theologies of healing, but locking it into some kind of transactional package deal is not the answer.

Will it mean that all people should expect to be healed? No, and for two reasons: First, it just doesn’t work out that way. Second, we all end up dying in the end anyway. Yes, my friends, we are all going to die. Have a nice day. ☺

Here’s a possible way to think about this, a way that could help us dialogue creatively with our friends across the globe: Physical healings that come as a result of prayer are signs of the Kingdom of God. They are not guarantees, they are not based on adequate levels of faith, and they are not the result of neatly organized theologies. They are signs that God’s kingdom is a partial but present earthly reality, a reality to be fully realized when God draws all things together in the new heaven and the new earth.

So, I keep praying for people to be healed. I also go to the doctor (even though I’m in a crummy HMO and supernatural healing is sounding better to me all the time) and try to do things that positively impact my health. I try to expect that God will actually work in people’s physical lives, but I don’t demand it or crumble in disappointment if nothing seems to happen. Whether we live or die, whether we remain wounded or are restored, our lives rest in God’s care.

Prayer for healing is a sign of the Kingdom.

Caring for one another is a sign of the Kingdom.

Trusting God in all circumstances is a sign of the Kingdom.

And so, we pray: Your Kingdom come, your will be done, on earth as it is in Heaven. Amen.