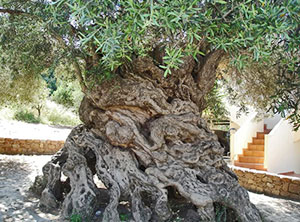 But if some of the branches were broken off, and you, a wild olive shoot, were grafted in their place to share the rich root of the olive tree, do not boast over the branches. (Romans 11:17-18)

The apostle Paul uses the metaphor of the olive tree to describe how God has included the Gentiles in his family, a family that is rooted in the faithful people of Israel. The non-Jews were, in Paul’s description, grafted into the rooted life of the Jewish people, sharing in their inheritance before God.

This grafting—which would one day evolve into what we now call the church—was not into a root that enjoyed the power and prestige of a dominant culture. Instead, it was a rooted people who were in exile, a people living in their homeland but under the political, military, and economic dominance of Rome. The church was birthed into an exiled family.

We now live in a culture where there are new voices that insist on new realities, realities related to economics, government, sexuality, and spirituality. These voices demand a hearing and often find a place of dominance, requiring people’s acceptance that in these new stories, all is well. The worst crime imaginable in such a world is suggesting that all is not well.

Followers of Jesus have the opportunity to live out a prophetic vocation in the world. Such a vocation sees the world as it is and refuses to claim that there is “peace, peace, when there is no peace” (Jeremiah 6:14), not to cast judgment, but rather to properly identify the wounds of the world and seek to bring healing. Because these followers see the brokenness of the world reflected in their own lives, they can stand in solidarity with the world without permitting brokenness to have the last word.

When leaders, therapeutic practitioners, and ministers claim that all things are well, that all preferred expressions of life are valid and proper, then they had better be right. Otherwise they are guilty of malpractice and risk leaving people in places of destruction, assuring them that all is well. And the worst kind of malpractice is spiritual.

Jesus approached the broken and marginalized of his world with eyes wide open. True, they came to him just as they were—tax collectors, demoniacs, prostitutes—but Jesus never left them as they were. He saw that there was pain and distortion in human lives, and he reached out to heal, not to condemn. His harshest words were for the religious elite who had chosen the vocation of judgment.

Jesus meets all human beings right where they are. And then he says, “Follow me.” Once the following begins, nothing will ever be the same. The following becomes a healing journey with Jesus, and it is always a journey into exile.