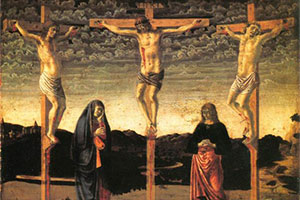 The Crucifixion is arguably one of two or three monumental historical moments for the Christian church. In addition to the incarnation and resurrection, no other event has as much latent mystery or power surrounding it. It was through this action of cosmic redemption that Christ made permanent satisfaction for sin and Divine righteousness available for broken humanity. Upon further reflection, however, it seems that this pivotal, historical event not only accomplishes something for human salvation, but also unveils to us the eternal heart of a loving, humble, giving God.

When we look at the cross, we see pain, suffering, and death; the Son of God brutally murdered for dubious reasons at best. But when we look for a vision of the Godhead within these horribly unjust circumstances, we find a giant, Divine-sized love bursting forth! The simplest story of the gospel wrapped up in John 3 tells us that it was for love’s sake that the Father sent us his Son. This Divine love was so motivating that God gave something (someone) to us. Did you catch that? God gave. I think this is the most striking feature of the Crucifixion event. The eternal, self-sustaining, perfect God gave himself to his creation. He didn’t send a representative or liaison. He wanted to be directly involved in the work of redemption and so he offered himself. Unfortunately, giving himself to us also required that he be vulnerable. Vulnerable to rejection and shame. Vulnerable to suffering and pain. But that didn’t stop God. Why? Because God is a humble God. This doesn’t mean that God is weak. Weakness is not the opposite of humility. God is humble in that he is willing to accomplish cosmic redemption in an inconspicuous sort of way – a simple birth, a misunderstood ministry, and an insignificant death. What a cover for such a magnificent mission!

I would encourage you to take some time this week to praise God for his character. We truly serve an amazing God! Also, why not ask God to show you how you can emulate his character traits of love, humility, and sacrifice to those around you? You might be surprised at how much life is found in these actions.