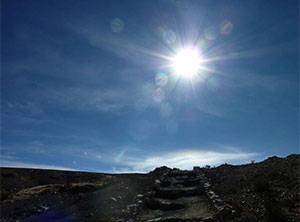 After years of living through days, I’ve observed that afternoons are hard for me.

I prefer mornings; they hold more promise. In the a.m., I am energized by a new start, the vision of achievement, or maybe I am simply lifted by the vaguely purposeful parade of people heading out to work or to school or to their tasks and errands.

But in the afternoon, everything seems to slow to a crawl. What I set out to do in the morning has taken more time than expected. I’ve hit a few obstacles and must again confront my limits. The vision I began with has grown hazy or distant. Nothing is quite as meaningful as it was a few hours earlier. I sit in my house or cubical or car casting about for something inspiring but end up rearranging my desk or rereading old emails. The sun, high in the sky and glaring through my window, has not moved for a while. Time appears to be standing still. And there are yet hours before the novelty of night brings its cool release from day. Meanwhile, nothing satisfies, and I feel mildly depressed.

The desert fathers sometimes called this mood and its attendant temptations ‘the noonday demon.” Over time, it can tempt us to the vice they called acedia—which can look either like apathy or nervous busyness, each of which arises from the same source– a lost vision of (or resistance to) God’s will for us each day.

This can occur not just on particular days but in particular seasons during our “long obedience in the same direction,” as Eugene Peterson calls the Christian life. And it can occur in season of Lent. After the initial promise of a new spiritual discipline and still before a vision of its fruit (or at least its end), we often must move through the “afternoon of Lent.” Like my afternoons above, we sometimes can’t remember—or at least feel—the point of cutting back on Netflix or reading each day’s psalm. We’ve lost a vision of what these were supposed to achieve. In the afternoon of Lent, our disciplines and detachments begin to feel trivial and paltry next to the world’s real needs and problems. We feel spiritually small. We long for the dramatic, to accomplish great feats, to be influential, to turn stones into bread.

At this point it is good to remember that, in Scripture, the small is no less important for being small. In the mustard seed, the one coin, the few loaves and fish, the still small voice– something is beginning that may blossom out surprisingly and disproportionately. Through these small acts, something large is being nudged over in us—a habit, a resistant will, a deep attachment. And who’s to say what might come from this? A kinder word, a more patient response, a wiser choice, an embrace, a gift, a taste of life, a step back from sin, a death to self, a break in the chain and a glimpse of freedom. Who benefits? Not just us. A spouse, a child, a roommate, a friend, a stranger, the pale girl on the screen, that man on the street, a descendant, our children’s children. Where our small act of obedience goes we cannot say because the Spirit, which is at our back, is like the wind. As Dostoyevsky writes, “all is like an ocean, all flows and connects; touch it in one place and it echoes at the other end of the world.” Or as Jesus says, “Truly, truly, I say to you, unless a grain of wheat falls into the earth and dies, it remains alone; but if it dies, it bears much fruit.” (Jn. 12:24).

Of course, we may know nothing about the fruit of our devotion. But in the afternoon of our weakness, like Paul we may hear God say, “My grace is sufficient for you, for power is perfected in weakness” (2 Cor. 12:9). And growing in grace is no small thing.