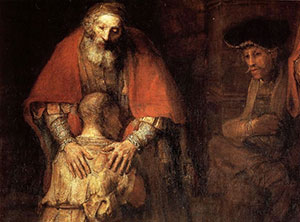 “So he set off and went to his father. But while he was still far off, his father saw him and was filled with compassion; he ran and put his arms around him and kissed him. Then the son said to him, ‘Father, I have sinned against heaven and before you; I am no longer worthy to be called your son.’ But the father said to his slaves, ‘Quickly, bring out a robe—the best one—and put it on him; put a ring on his finger and sandals on his feet. And get the fatted calf and kill it, and let us eat and celebrate; for this son of mine was dead and is alive again; he was lost and is found!’ And they began to celebrate.” (Luke 15:20-24)

This story is an excerpt from Jesus’ parable of the lost son. Most of us know how it goes: The son asks for his inheritance from his father, a gift that should have only been given upon the father’s death. The son is granted his request, wastes no time in squandering it all, and finds himself with a ruined life. At the lowest point of his desperation, he decides to come home and ask his father to accept him back again, not as a son, but instead as a hired servant.

On his way home, the son practices his speech: “Father, I have sinned against heaven and before you; I am no longer worthy to be called your son; treat me like one of your hired hands.” I suspect that he went over his confession a number of times, making sure he got it right, anticipating a short and hostile reception from his father.

But when the father receives the son, the reception is neither short nor hostile. To the son’s apparent surprise, the father embraces the son and kisses him. And when the son starts talking, the father doesn’t even let him finish his well-practiced speech. He cuts him off half way through and orders his slaves to get everything ready for a big party.

The son came to talk, to set the terms of his demoted and shameful status in the family estate. But the father needed for the son to listen, to learn about a new reality of love and forgiveness that the son had not been prepared to experience. When the son quit talking and began to listen to his father, this new reality came into being for him.

Sometimes when we pray, we talk too much. I wonder if God ever tires of hearing us tell him how things in the world need to get fixed. When I pray the Lord’s prayer—a prayer we repeat every week and perhaps every day—I am often amazed at its brevity and the implicit assumption that God is capable of taking care of things. It is also a prayer that is short enough to provide to us the time to be quiet and listen. In the listening, we might just hear God speak of things that will surprise us.

The lost son had been living in a self-created reality. He trashed his life, reframed his identity, and then laid it before his father as the only possible way forward. The father blessed the son by cutting off his speech and drawing him into the reality of love. Once the son’s talking ceased and the listening began, blessing became apparent.

Many of us have laid out to God the terms of our self-created realities. Maybe we can’t get past our regrets and failures, so we let God know that we’re happy to accept second-class status in his family. But God is very likely to cut us off in mid-sentence when we tell him those kinds of things. It would be a good thing to stop talking about our terms and let God disassemble our assumptions. Once we close our mouths and open our ears, God’s surprises become possible for us.

That’s cause for celebration.