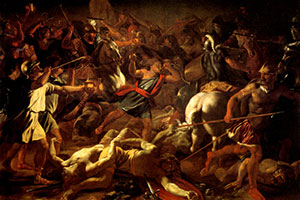 “If you think small doesn’t matter, spend a night in a locked room with a mosquito.”

One of my favorite stories in the Old Testament is Gideon’s victory over the Midianites (Judges 7). He starts with 32,000 men. God tells him to let the fearful go home, so 22,000 take off! Gideon figures he can still do it with 10,000, but then God tells him to give each one a “physical”—namely, test their water drinking capability. God doesn’t like the way 9,700 drink water, so they are sent packing. With only 300 men left, God then tells Gideon that the 300 will not use weapons to defeat the Midianites, but (to paraphrase) bugles and flashlights! To make a long story short, Gideon’s army won.

What’s up with God’s strategy? He gave his reason to Gideon: “The troops with you are too many for me to give the Midianites into their hand. Israel would only take credit away from me, saying, ‘My own hand has delivered me.’”

We at Holy Trinity are a small community at this point, and I wonder if we are small by God’s design so that we will not take credit away from God as we infiltrate the neighborhood and the city of Costa Mesa. The local church exists 24/7, meeting on Sundays to swap stories about how it went the previous week, hearing biblical stories about God’s faithfulness in the past, and leaving with renewed spirits after the benediction (Gideon’s trumpet?!) to go back out as church into the schools, businesses, and neighborhoods to which each member has been divinely assigned, doing subversive work for the Kingdom.

In any case, we should not be worried so much about the body count. We should be concerned that the church will be the church (and not try to duplicate the mall or Starbucks) so that God gets the credit and the world will know that it’s the world.