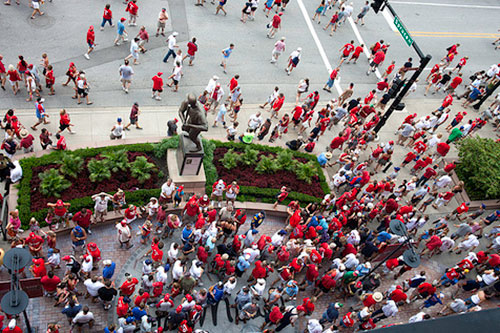 I know it is tough to be a Christian today. These days, in polite society, one gets the impression that no decent person with even a shred of intelligence could believe the non-scientific, backward, even hateful things that Christians purportedly believe.

Game over? Are Christians just waiting for the clock to run out, wondering if, like youth sports, there is a mercy rule in religion? I see many Christians, in a hurry to get to their cars and leave, hustling out of the stadium of religion, heads hanging in grief, guilt or shame.

I get it. I understand both sides. People genuinely misunderstand Jesus. They think they have heard the Gospel. They say they know Christians. But they reject both the caricature of Jesus they have heard and the un-Christian Christians they have met. Christians feel judged too—rightfully protesting: “We don’t hate gay people! We are not all in bed with politicians! We don’t think that everyone who disagrees with our denomination is going to hell!”

This is all real. But the instinct to fight back in a kind of PR war will not work. Remember The Fish Wars—the Truth fish eating the Darwin fish? That went well…for sellers of trinkets. But I’d bet my last dollar that millions of pieces of plastic of the back of cars did not change many minds. No one ever converted to Christ because they lost a bumper sticker war.

But, standing tall in the middle of human history, behind all the ups and downs of two thousand years cultural religious tension is the person of Jesus Christ. He is the most amazing being to ever walk, talk or do deeds of love, power and justice. He can handle some bad PR.

Jesus stands through his moments on the cross. At the cross Jesus stepped upon the stage of world history, where he has remained up to the present. As he said at a crucial turning point in his career (John 12): I, when I am lifted up from the earth [in crucifixion], will draw all people to myself. We need to see clearly the profound wisdom of his chosen path toward his goal.

Jesus very purposively rejected opportunities to be a political or military leader or a king. With his incredible power and attractiveness, had he wished to do so, there were many ways he could have avoided the cross. But, as he clearly told his followers at the time (John 10): I lay down my life in order to take it up again. No one takes it from me, but I lay it down of my own accord. I have power to lay it down, and I have power to take it up again.

In his death on the cross Jesus revealed both the depth of human sin and brutality and the unlimited reach of God’s love and power. Jesus lifted up on the cross is the turning point in history that consistently makes itself seen and felt in every generation—even generations in which church, Christians and religion are not popular. How? Two things:

First, as Paul wrote to the church at Corinth, we preach Christ crucified…the power of God and the wisdom of God. And second, we live as if we believe this wisdom is true. We don’t, in frustration, merely point to doctrine. Rather, being partakers of the life of the risen Christ, we announce, embody and demonstrate a cross and resurrection-enabled life. We do so not just for our own piety, but also for the sake of others, that others would experience our followership of Jesus as for their good.